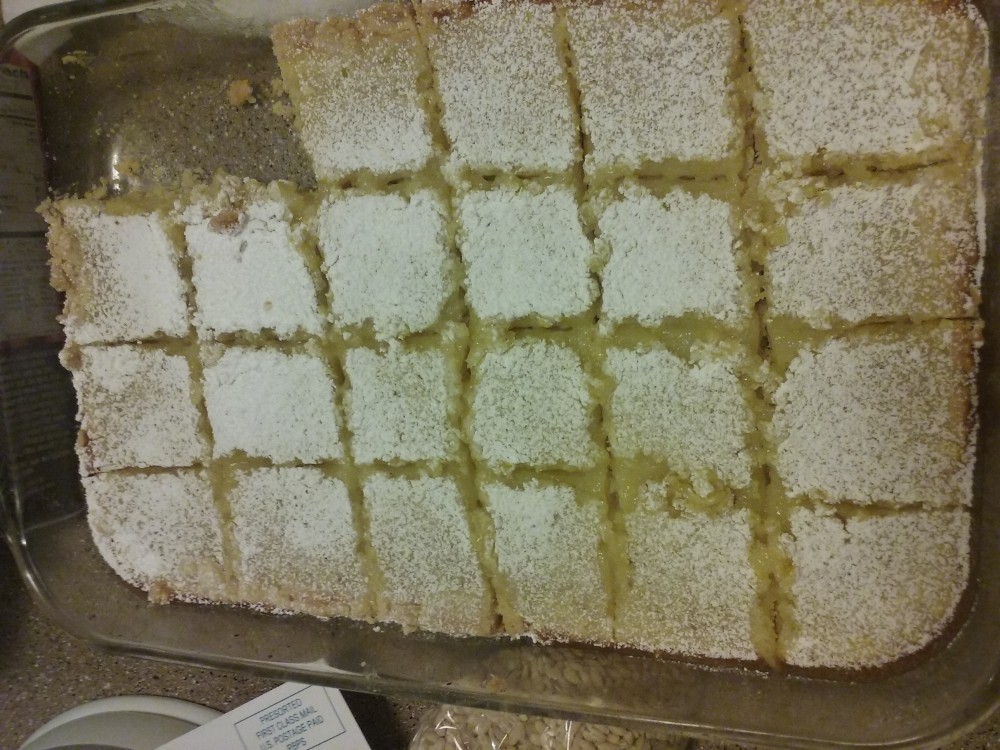 I had my first DND game last weekend and thought about making some bar cookies. My friend from the East Coast was also going and said he wanted lemon bars (though I reminded him that DND is not a tea party).

We have this ongoing hilarious conflict (that is more than just our opposite coasts) which is me, innovative dessert experimenter versus him, the traditional dessert purist. His title means that he likes classic desserts made well, so no nuts in your brownie and definitely no chocolate covered bacon because it is too much of a novelty.

I acquiesced to the lemon bars because I had not made them before and he picked out a recipe:

He says that the comments from people make the recipe better. I did insist that we add lavender because that was an idea from one of my recipe books.

The book called for 3/4 teaspoon of edible lavender. I pounded this into a powder with my mortar and pestle.

The scent spread very quickly through my apartment and through my friend’s apartment when I opened the bag it was in. This strong scent told me to add less than the 3/4 teaspoon, because like adding too much rosewater, I was concerned that the bars might taste like soap.

1/4 tsp is all you need for a subtle lavender flavor. These were immensely popular at our DND game probably because we brought tea as an accompaniment. As you can see there are two missing in the above picture because my friend and I wanted to make sure they tasted alright.

My friend also said if I like the lavender lemon bars, I should try a plain one because those are also amazing.

I rolled my eyes and said “Yes I know what a plain lemon bar tastes like,” so the disagreement about desserts continues.