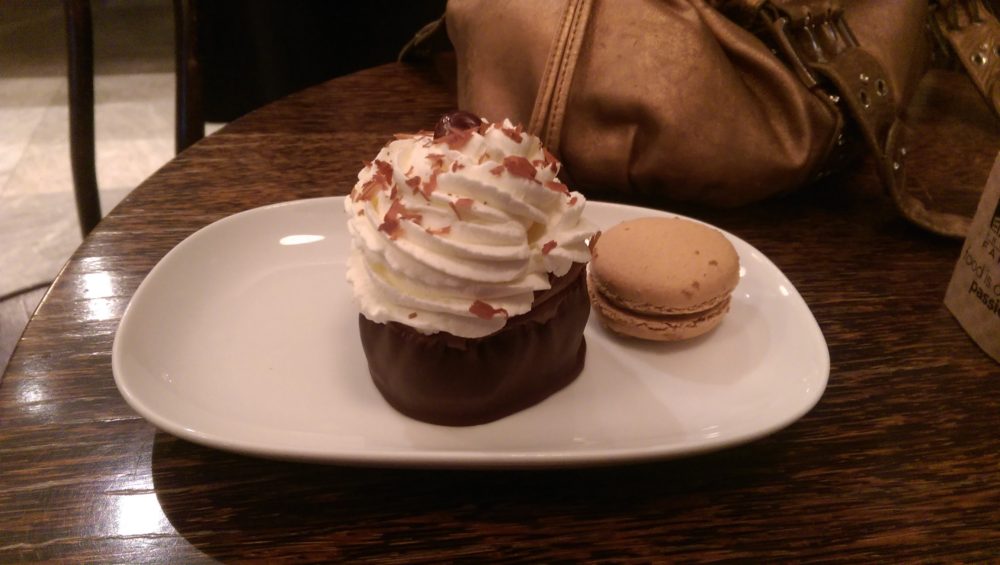 I haven’t been posting as frequently because I was traveling and have been taking a class. I took a weekend to Vancouver, BC. My friend made a google map of food places to hit, and Thierry chocolates was one of them.

We decided on this excursion after vetoing the dessert option at the dinner place we went to.  We even took a ferry back and walked several blocks. And I was wearing heels!

This dessert shop seemed very well known for their macarons. It was almost 10 pm and people were still buying them by the double box or more. They had normal flavors, but two interesting ones: lychee and brown sugar chocolate chip. I snagged the brown sugar one, even though my friend told me we only needed one dessert.

The brown sugar macaron had a light maple flavor and the crisp of the cookie and the chocolate chips were a nice contrast.

The other dessert we selected was a miniature black forest cake. The cake had a  crunchy chocolate shell around it and inside there were succulent boozy black cherries. It was really rich so maybe sharing was a good idea.

The only issue was that there was a limited  selection of packaged chocolates to have at a later time. Or, in my case, to take back to the U.S.

I would have brought home so much!