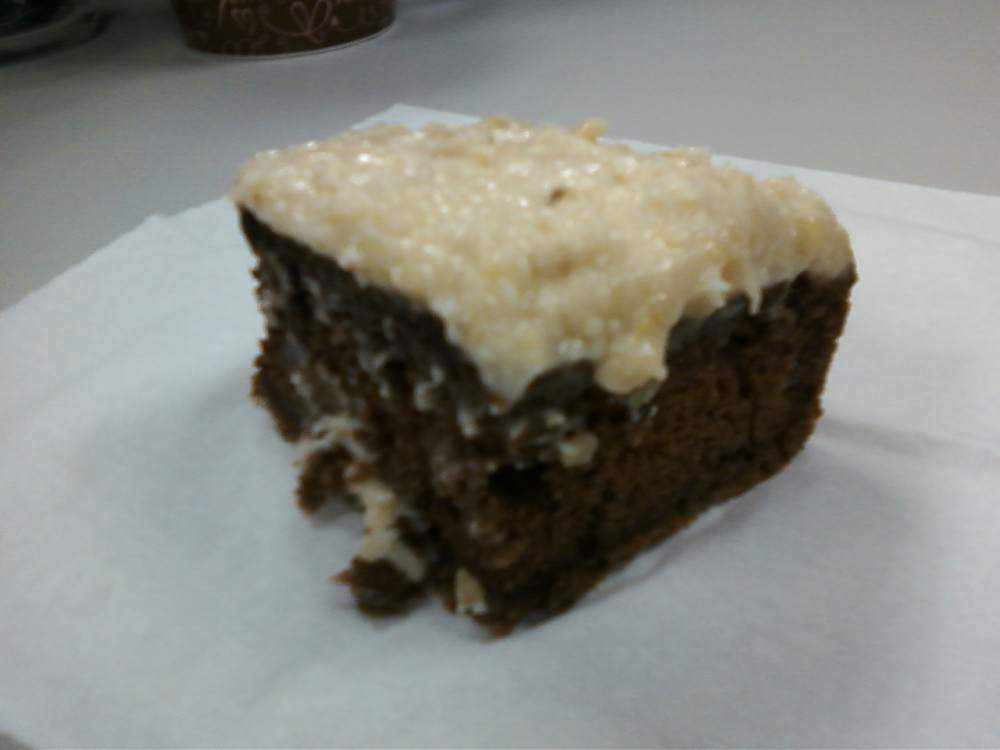 A friend of mine from Salem texted me one weekend:

“Dude, when are you coming over next? Salem is boring so you should come over and we’ll make a cake.”

He wanted to make a multi-tiered cake with a limited selection of cake pans after admitting to not having made a cake before, so I decided to pick a simple recipe and told him we will work up to multi-tiered tasty works of art. I have only made a two layer cake once, so we could both use the practice.

I selected from a cookbook I hadn’t used before “The Brown Betty Cookbook: Modern Vintage Desserts and Stories from Philadelphia’s Best Bakery” by Norinda Brown Hayat and Linda Hinton Brown.  I was shelving books at the library when the “vintage desserts” keyword jumped out at me.

This book has many a classic cake, pound cake and dessert recipe (like white chocolate macadamia cookies, cheesecakes and sweet potato desserts).

They also, to my interest had a few nudie cake recipes, which means no sugar added. Instead of sugar, they used preserves, fruit and juice as a substitute.

Though my friends were hesitant to the lack of sugar and mix of multiple fruits, in the end it was very tasty.

The Nudie cake we made had blackberry preserves, white grape juice (though apple works just as well and was what we had), and two mashed bananas. I was supposed to add a cup of boiling water at the end, but I forgot.

The only drawback to that was the cake was more dense but I liked it that way. The water would have increased the volume when we already filled a sheet cake pan. Even for our Salem six person dinner that was a lot of cake.

My friend was in charge of the frosting and though the recipe came with a blackberry butter cream, I thought his chopped cashew butter cream was much better.

The cake had the texture of a banana bread or another quick bread, but the mixture of cocoa and blackberry made it more of a dessert.

Overall, nudie cake is a new phenomenon I will be trying again soon.