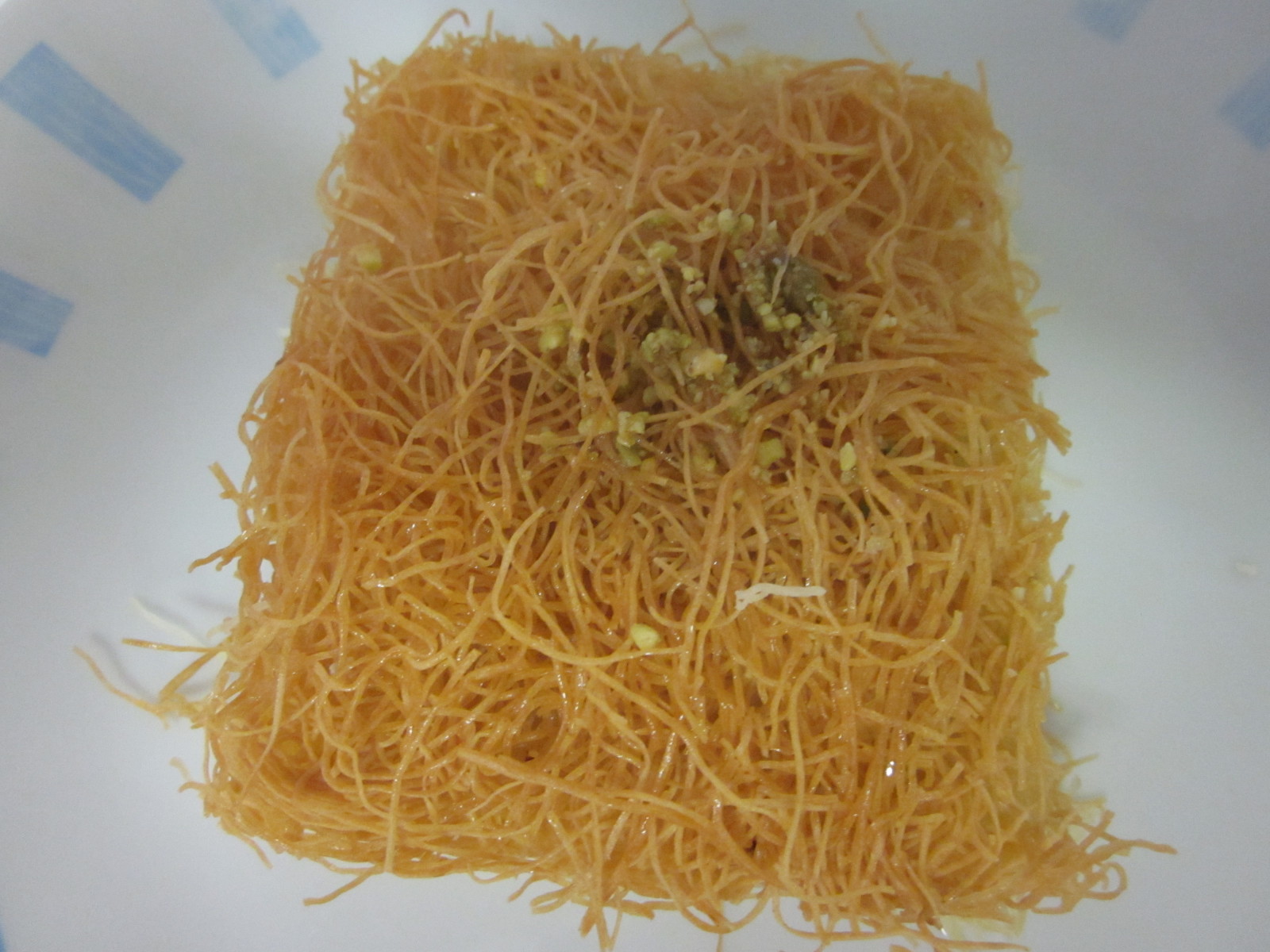 I tried out the only independent coffee shop in my new neighborhood and found a charming Middle Eastern restaurant called Gyro House Mediterranean Grill. They are located in Beaverton, OR.

Gyro House has many other wonderful food items to offer besides their gyros and homemade french fries with tasty sauce.

Their wood fire oven is right by the window so I watched the racks of bread being baked and perused their pastry selection.

I picked this interesting kanafeh (which I thought was called Knafeh, but was missing some A’s) because it has an interesting texture. Plus, I wanted to try something that was different from the usual baklava sold at Middle Easter restaurants.

The strings look like those chinese noodles you put in salads, but they are actually finely shredded phyllo dough. The green sprinkling on top is pistachios. There are two layers of the phyllo dough and between them is a sweet cheese filling, similar to what you would find in a cheese danish.  You heat it up for a few seconds in the microwave, along with the side of rosewater. When the kanafeh is warm, drizzle the rosewater on top.

I was thinking about making this myself before, but was discouraged because I didn’t want to wrestle with the shredding of delicate phyllo dough. But according to “Balaboosta” author, Einat Admony, you can buy the pre-shredded dough at Middle Eastern stores.

I discovered Ms. Admony when I was looking to buy another great Israeli cookbook on Amazon. She came up as the top seller in that cuisine, so I checked out the “Balaboosta” cookbook from the library.

Admony runs a restaurant in New York and her cookbook formats recipes in a very fun way. She connects food to personal stories and also advocates for family participation to understand and enjoy food (her little boy even knows how he likes his red meat cooked).  The cookbook chapters are not categorized by dessert, breads, etc but by fun elements like “The First Cut is the Deepest: Foods that Comfort,” “Just the Two of Us: Romantic Dishes” and the section with kanafeh in it, “Fancy-Schmancy: Restaurant Worthy Dishes.” The recipes even weave in some of Admony’s personality, to make you feel like you are watching a cooking show.

For the kanafeh recipe, see page 256 of “Balaboosta.” Admony compares the cheese layer to a cheesecake, and uses ingredients that are readily available in the U.S. like semolina and ricotta. And in her narrative fashion of providing recipes, Admony notes that kanafeh is a dish that “looks fancy without your having to spend all day in the kitchen.”

To take a look at the book, here is the Amazon link: